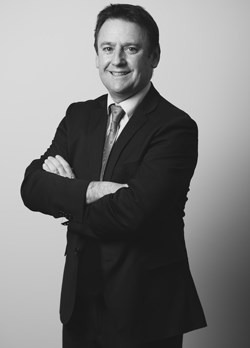 Marcus Turnbull SC is a Tasmanian lawyer who has been practising law for almost thirty years. He was appointed Senior Counsel by the Supreme Court of Tasmania in May 2020. When Marcus first began practising law, he specialised in criminal and industrial law. After eight years of criminal law, Marcus decided to start practising in family law. Marcus chose family law because he wanted to work in an area of law that included lots of court work and opportunities for skill use and development. For Marcus, the best thing about family law is that it encompasses many different types of law, so there are lots of opportunities to deal with many various issues.

‘You work in every area of law; criminal, trusts, family violence...’

Throughout Marcus’ long and successful career as a family lawyer, he has seen many changes to the way family law is practised. A significant difference was when collaborative law became a buzz word in Australia ten years ago. Collaborative law aims to settle disputes outside of court. Collaborative law promised a quicker, cheaper, and successful way to resolve family law disputes. However, it was not successful in Australia because Australia has an adversarial approach. Collaborative law remains a popular method in Canada and parts of the United States of America; however, Australia has replaced this method with private mediation style conferencing. Private mediation style conferencing combines Australia’s adversarial approach with the many benefits of resolving conflict outside of court, and it has a 90% success rate. In this approach, a mediator conducts a full day of mediations to resolve the dispute. Alternatively, the mediation could involve an arbitrator who makes decisions about the conflict. Marcus in an accredited mediator and is the Tasmanian representative on the Board of Australian Institute of Family Law Arbitrators and Mediators (AIFLAM).

Marcus has also experienced a change in the role of barristers and solicitors in Tasmania. Tasmanian lawyers have always been in a unique position – their role is fused so they can work as a barrister and a solicitor. In contrast, most lawyers work as one or the other. Lately, many more lawyers have moved to the independent bar, acting as barristers only. Marcus still works in the traditional ‘fused role’, but mainly as a barrister, arguing matters in court.

The most recent change that Marcus has seen to the practising of Family Law in Tasmania is the response due to the COVID-19 pandemic. Marcus has been impressed by how the Australian legal system has quickly adapted to a new way to conduct their work. Marcus has viewed trials conducted via video conference using Microsoft Teams. All aspects of a trial, such as cross-examination and submission, were done successfully through video conference, while all respective parties stayed physically distanced in their homes. Marcus has been impressed by how his colleagues and their clients have embraced technology; the majority of whom had little difficulty switching to this new online style of law. Marcus believes this is the case for many service providers who can utilise technology to continue to deliver their service to their clients.

Marcus regards developing a barrister’s practice as his greatest career achievement. Marcus is a partner at Ogilvie Jennings but undertakes barrister roles for other firms. Lawyers throughout Tasmania (and occasionally from other states) arrange for Marcus to run their cases in court. Marcus is also regularly involved in ongoing legal education, particularly for younger lawyers. Recently, Marcus was humbled to receive the Law Society’s ‘Presidents Award’, for his contribution to the Tasmanian legal profession.

Marcus’ advice for those wanting to become a lawyer is simple – read the newspaper. Marcus believes that understanding what is going on in the world is paramount to understanding your client’s life and their experience. He believes that a successful lawyer is a jack-of-all-trades because you never know what advice your next client will need, so you need to be prepared to advise them on anything.

‘If you know what is going on in the world, you will be a reasonable lawyer.’

To contact Marcus call his office on (03) 6235 0800 or email him at marcus.turnbull@ogilviejennings.com.au.